My wife likes to run. She has been fortunate enough to find another foreigner who is both local and likes to run also. Me, not so much. So I take my bike for a ride then :) And being on the edge of town, you get some really nice clear views of the surrounding mountains. Enjoy the views ;) 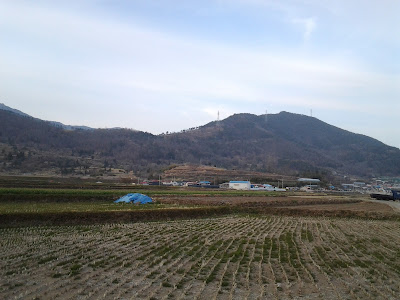 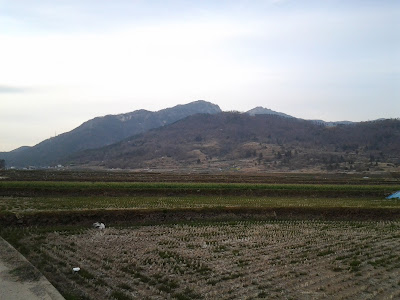 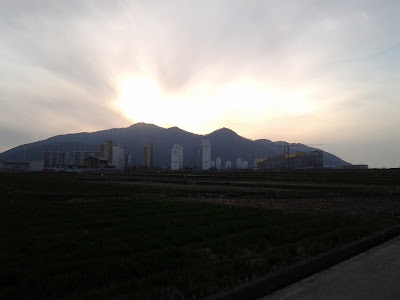 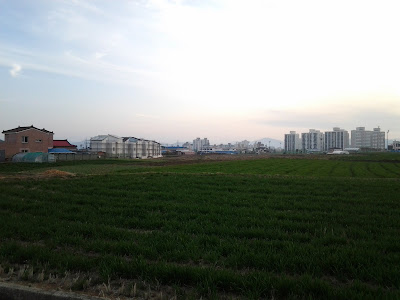 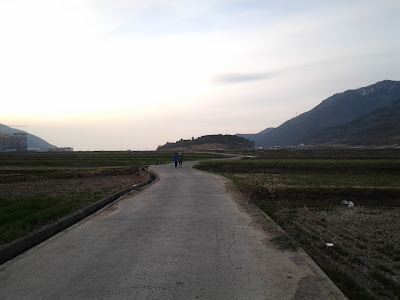 My wife and her friend jogging ahead of me.

Not all weekends have to be spent travelling to various tourist traps. This weekend was one of my most fun and I didn’t go beyond a 30min bus ride from my place. This was a weekend for exploring our own area. On saturday we went to the other part of Sacheon. First I have to explain that Sacheon is a very LONG city.

It was once two different cities that merged.  We are in the southern section called Samcheonpo while the northern section is called Sacheon-eup(this is an over-simplification but it will suffice).  In the middle is the new City hall.

The day was pretty cloudy and not terribly condusive to great photos but I did manage to find this one shot that looked pretty interesting. 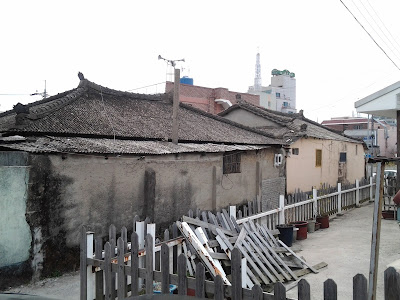 These are typical older houses that are slowly being replaced by apartment buildings.  Korea can really only build up with their geography.  We walked around for a bit, grabbed some snacks and some spicy chicken(not terribly spicy really) and then headed back home.  While nice to see another part of the city, the day was windy and cloudy.  Not overly motivating to stay and see much.  We’ll go back another time.

Sunday we decided to walk to the E-Mart(a kinda Wal-Mart clone).  This was a much nicer day, still a bit windy but much more sunny at least :)  We started at our place (posted this pic before): 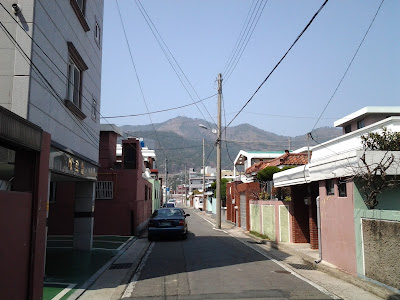 And we never take the main street/same way twice if we can help it.  If we had, we would have missed this awesome Buddhist temple on the backstreet! 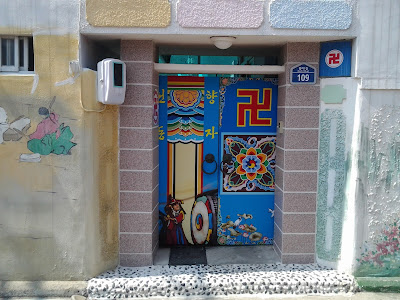 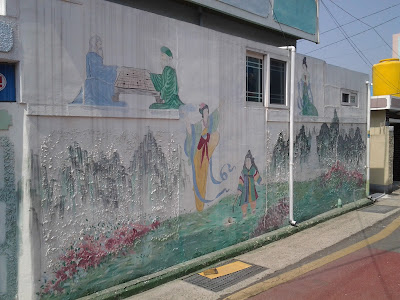 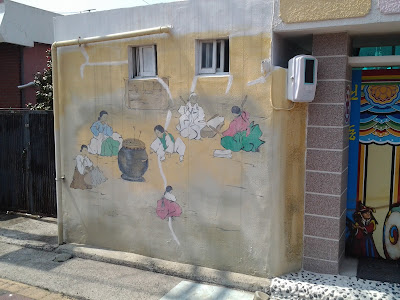 A little further down the street I saw this kind of ‘rose tree’.  I didn’t get a close look but it was nice looking. 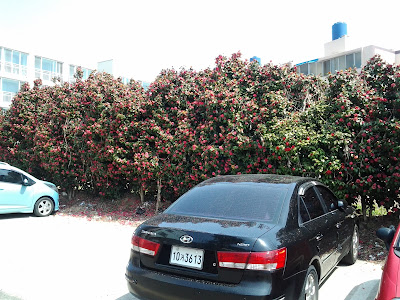 Koreans are big on growing their own food.  This is a dying art I think.  It is mostly older Koreans who do this and it seems to be a left-over habit from the days where you _had_ to do this or else you didn’t eat.  Now that the society has moved into a city, setting up a garden become a bit of a challenge but one they do a pretty good job at utilizing any space they can get their hands on. 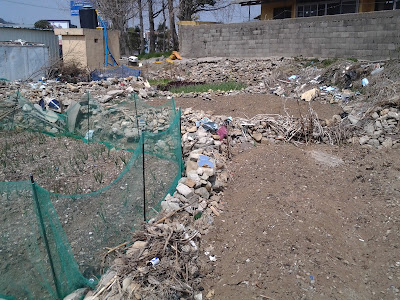 The ground here is literally filled with rocks.  I’d hate to be the one who had to clear all that up.

The city has some interesting ideas for display flowers…in vertical flower beds. 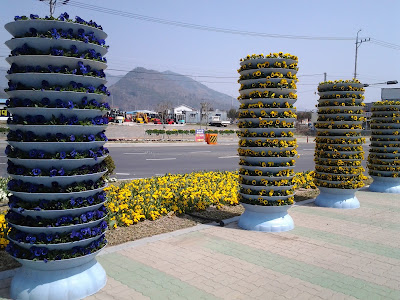 We saw one of man outdoor stores so we stopped by and made a new friend!  Her english was pretty good and she is interested in a language-exchange.  Cool! 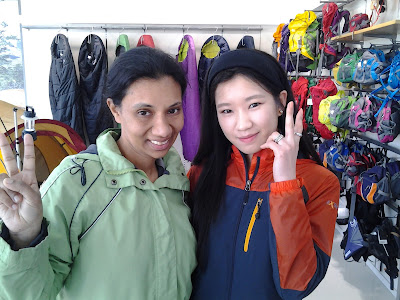 I didn’t bother getting pics of the E-Mart itself because….well, it’s boring.  Think Wal-Mart with prices and lettering in a foreign country and there you have it.  What I did get a pic of was the parking area. 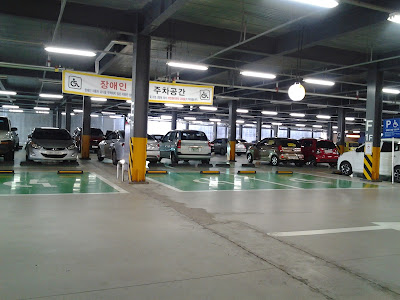 A very clean area.  If you look, you will see an area that is set aside behind the cars and before the other floor stops.  You can walk your cart to your car without interfering with the flow of traffic.  Very smart idea.!

When we were mostly settled here, I put up a post on Craigslist looking to meet some friends.

Looking for friends (Sacheon or Jinju)

Just moved to Sacheon and my wife & I are looking to make new friends. Foreign or Korean. Our Korean level isn’t quite fully conversational but we are eager to learn and practice more! We would even consider setting up a weekly language exchange if you are interested!

We are a young Canadian couple so don’t let the whole “married” thing let you think we aren’t fun :)

I had forgotten that someone sent me a message from that post.  We became connected on the local(and now international!) KakaoTalk.  We had been casually exchanging messages infrequently but on Sunday afternoon I got a message asking if I would like to go fishing with this person.  To be honest, I couldn’t really who the heck this person was, whether it was male or female(still getting used to names here) and where the heck I met this person.  I was mostly sure it was a guy because earlier that day he sent me a picture of a fish he caught in the morning.  Mentally putting that together, I was slowly narrowing down who this was but I was still unable to figure it out.  I told hm that sure, I’d go fishing with him.  I figured I need to make some local friends and this is as good a way as any.

When he picked me up, I didn’t recognize him and this was annoying.  So, when I got in his vehicle, I apologized and asked straight up “how did we meet?”.  When he said Craigslist, it clicked.  Ok, that settled, we were good to go.  A few minutes later we were at the fishing spot. 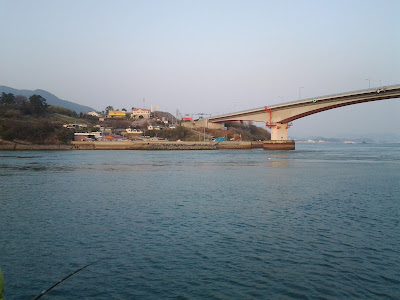 Fishing by the bridge 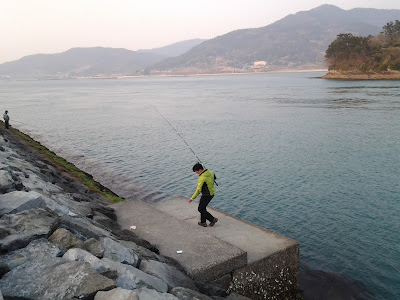 Setting up for the first cast.

I haven’t done fishing in a VERY long time.  These fishing pools were cool.  They were like the collapsible FM antennas but wayyyy longer.  The fishing pole he used must have been about 12 or 15ft long.  I had a smaller one.  We just put some bait on the end and tossed the lines into the water.  I asked how big of fish were here and he said very small, palm sized.  I asked because I saw others who had cast their lines and left their fishing rods sitting on the ground.  Obviously the fish weren’t big or strong enough to drag the rods into the water.  He cast his line in, set his fishing pole down and had to go back to his vehicle for something.  I cast mine in and the moment it hit the water, I got a bite!  Seriously, I pulled it out and was amused by my catch. 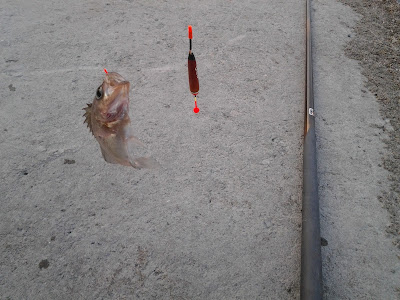 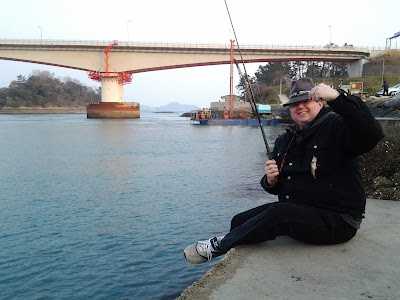 Look what I caught! I think I’ve had colds that were bigger :/

So there I am, all bundled up, with a tiny little fish that is smaller than my wallet.  We weren’t keeping them today but it was fun to experience this type of fishing.

A few minutes later my new friend caught one!

Second score of the day!

He asked not to show his face because he was embarrassed how little the fish was.  Koreans can be funny about that sometimes…ok, most times. 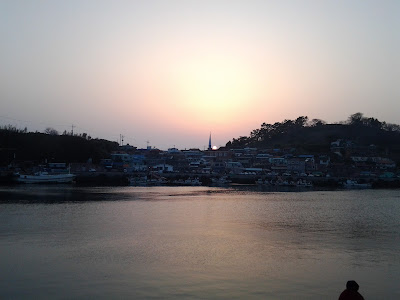 We didn’t get any more and because there was a rather continuous wind that was just a wee bit too cold for our liking, we didn’t stay long.  We left with me having an invite to diner at his place.  Apparently I am his first friend in 1.5 years of his living in this area.  He said we could practice some Korean and English as well.  Fine by me, we stopped by my place, grabbed my Korean book and then headed back to his place.  I learned some useful phrases (First, second, third…) and I helped him with his pronunciation.  He made Ramien and rice for dinner. He lived in the other area of town so after we had talked enough, I took the bus home.  All-in-all, a good day and weekend for sure!

I am finally in my new city.  What an adventure it had been to get here.  I am waiting at the bus terminal for my wife now.  When she is done her school orientation, then we will go to our new place.

This is a typical small town bus terminal.  I have been in some rather expensive houses that would be bigger.  The cabbies all wait under a covered area.  Very posh for them.

I get the feeling we will really like it here. While big Towns have everything there is one thing they could never have….that small town feeling. The “not in a rush to go every where”, the “get outta my way” aujumma rushing for the subway for dear life despite the fact that another one will be along in 5mins, the “accidental bump but I don’t have time to apologize” event are all missing from places like this. Yes, it will be nice indeed.