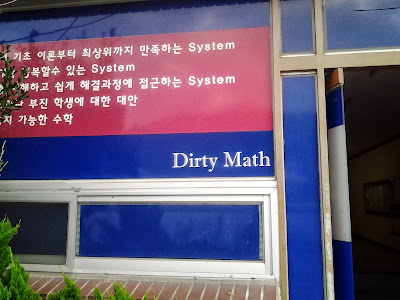 Of course I thought this would be an awesome way to motivate students to learn math…why not combine the worlds ‘oldest profession’ with ‘math’?  Ok, maybe a sad attempt for an business idea and I was going to just mentally going to drop it but then I saw this right across the street from it: 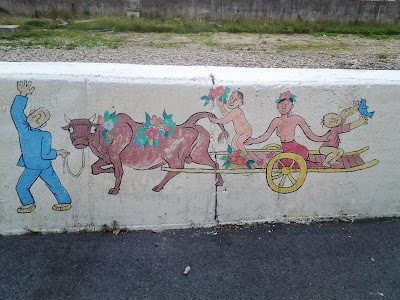 Maybe I wasn’t so far off after all….

There is s an easy way to confuse Koreans and it has to do with math.

You might be tempted to fall back on the apparent stereotype that all Asians are good at math and you would be smart to keep that in mind when you understand how rigorous their education system is at forcing students to memorize way more than any western educational system has ever done.  How many kids did you know that went for extra private math tutoring lessons?  Me, I didn’t know a single person who did.  Yet here, nearly all of the kids do.  They also go to math lessons, English lessons, music lessons as well add taekwondo lessons.  Many do this every night and even on Saturdays.  So the stereotype really isn’t a stereotype when its true.  An episode of the Simpsons elabourated this point rather well.

Marge: One month? That’s a heavy workload for a fourth grader.
Homer: I say this boy needs more homework. (I don’t have to do it with him, do I?)
Principal Skinner: No.
Homer: Pile it on! I want him to be Korean by the time he’s done.

Ok, back to math.  When I was in highschool, I sucked at math.  I mean, I literally squeaked by in marks in the 50s.  Seriously, I just did not study it at all.  Yet, after working in retail for a bunch of years such a skill was just naturally developed for fairly basic stuff.  While I ain’t gonna say I’ll whiz any type of algebra course(shudders), I certainly do well for quick multiplication and division.  What stuns me is how confused the Koreans get while working in retail.  Here is a prime example.  If I go to a store and the price comes to 9,300 won, I will hand them a 10,000 bill plus 300 won in coin.  They are immediately confused why I would do this.  I have to explain to them what I want back.  Two days ago the girl handed me back the 300 won and then proceeded to hand me 700 more won in change.  I kinda stood there with this handful of change in front of her looking like “Umm, I didn’t want a pocketful of change like this.”

There is a problem here, that has happened everywhere else too….capitalism.  For the most part, people only use their bank cards so change is used less than a squiggle on a signing pad.  This process has lent to the disassociation from the cash in your hand to simply making a mark on a pad.  Meaning people don’t place any significance on the money they spend.    So when you actually deal with change/cash, they don’t think like that as much any more and you confuse them.  It’s a very odd disassociation to witness.