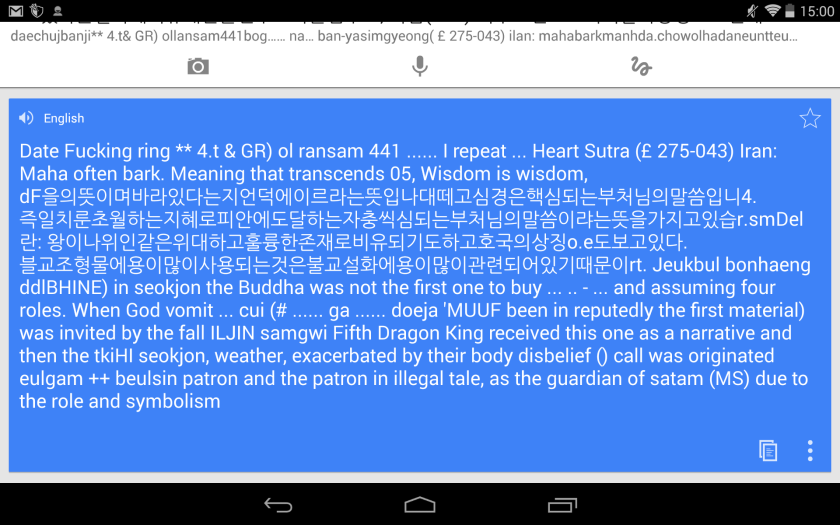 Today I’m on my usual walk and I stop to pet the little dogs that hang out at this small church.  While playing with the dogs, a group of about 6 soldiers walk past me.  Interesting as there isn’t a base near by that I know of.  Meh, what do I know really.  So I finish with the dogs and continue on. I see the soldiers have now occupied my normal pagoda.  So I continue on to another, smaller one.  While sitting there, a car drives along this path, which I thought was only for people/bikes….my mistake apparently.  He stops right by where I am, gets out, walks around for like 3mins, gets back into his car and drives off.  Guess I kicked him out of his spot. 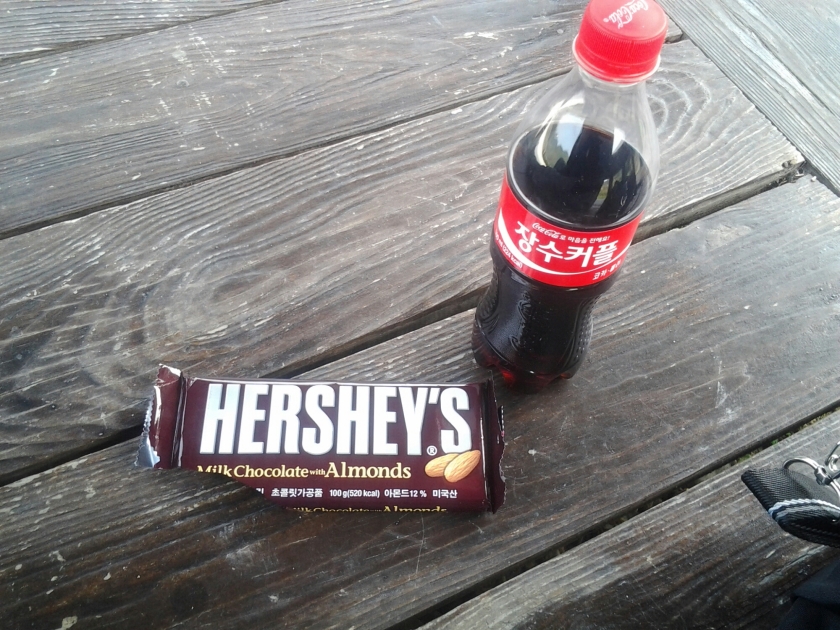 The Koran on the Coke bottle is part of a series of sayings that Coke has been doing for a while.  This one says 장수커플.  Literally “long life couple” but I think the meaning is more like “together forever”.  Actually, the last part, 커플, is what we call Konglish.  It is when you take Korean characters and use them to make English words.  In the car, 커 is like “caw” and 플 is like “pil”, so cawpil, or just couple. Same goes for the company name.  코(ko)카(ka) 콜(kol)라(la). 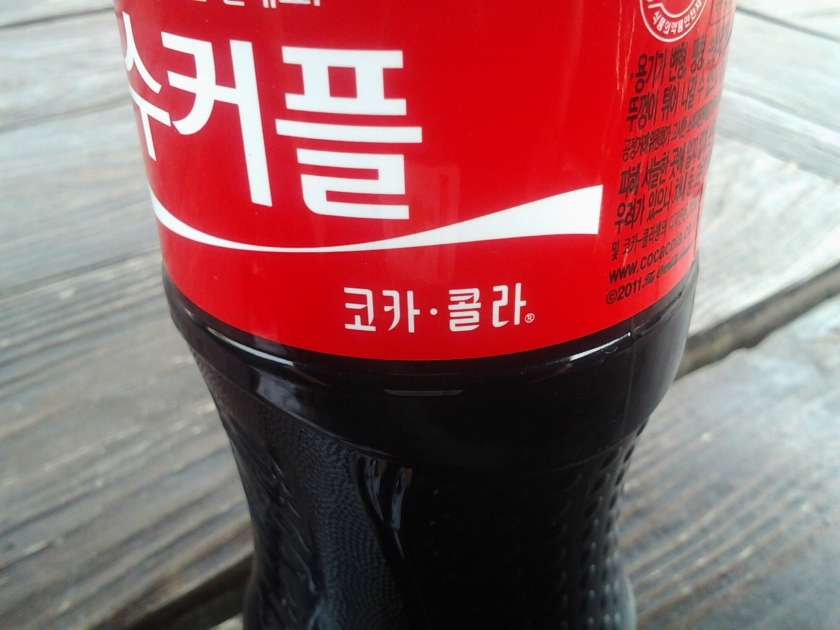 In one sense it is a little easy to use some Korean and understand things.  In another its annoying because you want to practice your learning so much and get annoyed when you try to read a restaurant name sign only to read “chi” “ken” “doc” “tor”.

I’m surprised that I haven’t dedicated a post to this so I am remedying this right now.  I’ll be drawing on Wikipedia as it is the best source of information (and those of you who look down on Wikipedia, you don’t know how it works!).

Fan death is a widely held belief in South Korea that an electric fan left running overnight in a closed room can cause the death of those sleeping inside.

That single statement has caused a whole nation to lose their ever-loving minds.  Their logic goes RIGHT out the door and their ignorance of how the world of physics really works is all they have.  While this sounds harsh, it is a fact of life here.  This myth is heavily perpetuated over generations and anyone from 7 to 70 believes this.  It is a single point of intellectual frustration to see such normally intelligent people get so dumb when it comes to this.  Let’s take a look at the lighter side in a video though.

The Koreans simply just listen to the news and absolutely ignore the ‘allegedly’ or ‘reportedly’ key words before the ‘fan death’ term.  Hell, if you tell them that NO WHERE ELSE IN THE WORLD has this belief, they don’t change their minds.

Gord Giesbrecht, a professor of thermophysiology at the University of Manitoba,[15] is a leading expert on hypothermia:

It’s hard to imagine death by fan, because to die of hypothermia, one’s body temperature would have to get down to 28°C, drop by 10 degrees [Celcius] overnight. We’ve got people lying in snowbanks overnight here in Winnipeg and they survive.

Their ‘logic’ will only point out that the person is not Korean.  As dumb as a defence that is, let’s go onto this then:

Dr. Lee Yoon-song is a professor at Seoul National University‘s medical school and works with the school’s Institute of Scientific Investigation. He has conducted autopsies on some of the people who have been described in Korean media as having succumbed to fan death:

When someone’s body temperature drops below 35 degrees, they do start to lose judgment ability. So if someone was hiking and later found dead, that could be part of the reason. But we can’t really apply this to fan accidents. I found most of the victims already had some sort of disease like heart problems or serious alcoholism. So hypothermia is not the main reason for death, but it may contribute.

Did you catch that?  A KOREAN citizen working at one of the highest rated NATIONAL universities here has stated that Fan Death does not exist.  He also touches on the lack of news reporters pointing out to any pre-existing conditions that are normally the real cause of death.

I defy any Korean to find me a medical report that definitively states the cause of death is due to a fan!

I saw this on my friends blog and thought our was definitely something for here :)

Graffiti on a bus seat

Being in Korea, there never seems to be an end to the odd and/or annoying things that you find.  Allow me to tell you about packaging and random phone calls.

First packaging.  After opening chocolate bars and bags of chips a certain way for the vast majority of my life, ot had become one of those automatic skills that you take for granted.  Like how you automatically adjust your body on a moving surface that changes inclines.  You don’t think about standing upright, your body just does it.  It is built in.  Yet when it comes to Korean packaging, you simply can not pull apart the ends like you do on a bag of chips or a chocolate bar.  You can only tear it.

For some reason, Korea has seen fit to use f#&!=+* super glue for their packaging and it gets me every time.  I buy something, try to open it and go “WTF?!”  Then I remember where I am and have to tear it open, not pull.  Super annoying.

Now, let’s talk about random phone calls.  Tell me, if you called a friend but got someone who did not speak your language on the other end, would you stay on the phone and keep asking for that person?  I didn’t think so.  I got a random call today, and answered the phone like I normally do. “Hello?”(clue #1).  The other person said the Korean version of hello (which is different than what you say to someone on the street/in person .  I forget what it means at the moment.)  I said hello again and he asked something in Korean.  I believe it was a persons name.  It kinda sounded like my Korean nickname.  So I said that I only speak a little Korean (in Korean)(clued #2) asked if that was the name.  He repeated the name again and my brain, still being a little slow at processing Korean, made me pause.  Then he said that ‘hello’ again.  I automatically repeated “hello”(clue #3 that you are not speaking to a Korean person and most likely the person you are looking for is not there).  He repeated the name again and I said there its no person here named that.

That was the longest random phone call i every had.  Usually when they hear English, they just hang up.  Not this guy though.  He wanted to hear a definite “아니요”(no in Korean, pronounced ah-nee-yo).

So there you have it.  I have taught you about Korean packaging and how to say “no” in Korean to a person on a random phone call. :)