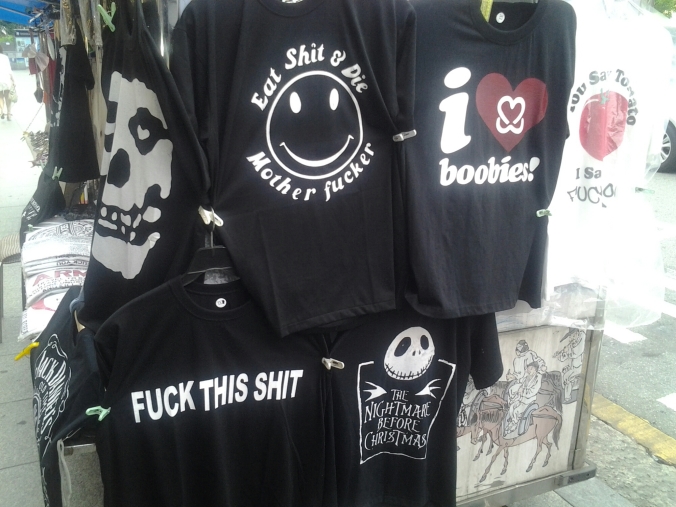 Itaewon is the place every tourist goes to.   The regular foreigners avoid the place life the plague…. Well,  not the young and drinking crowd.   None of us way good here,  who are truly interested in culture,  like Itaewon. It’s loud,  rowdy,  and full of drunk westerners. Still,  on occasion you find yourself there because it ends up being the most convenient place to meet up with people.   It does have an ally high concentration of restaurants,  some of sick you won’t find anywhere else.  I guess it’s an OK place if you are feeling homesick because you can get your fix of  McDonalds,  Burger King,  KFC,  Outback,  Subway there.  Plus a million other street stalls to buy over-priced ‘Korea shirts’ (as it was shouted to me once).   Here is a fine example of such great things you can buy there.

Some things I have seen here are like “wow, why the heck haven’t we done that yet?” and others are like “I hope to God they never do that!”  This is one of those “Huh?” things. 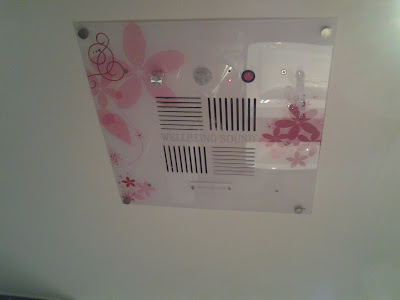 I was in a Dunkin’ Donuts in Itaewon and had to use the washroom.  In I go and I hear this symphony playing over head.  I look up and see this.  At first I thought it was just a cute speaker cover and paid it no further attention.  After my sit-down business was done, I noticed that the music had stopped.  When I got up and moved to the sink, the music came back.  That’s when I noticed the little sensor on it.  This is a ‘motion sensor so that your washroom experience makes you feel better’ sound device.  At least, that’s what it said in the catalogue ;)

Now, if you are easily offended, don’t’ read past this line.

I read a North Korean joke a couple of weeks ago.  It went something like this:

“During the winter time, does the North Korean soccer team practice inside or outside?”

“Trick question.  There is no heat so it doesn’t matter.”

As amusing as this might be, even somewhat gruesome deep down, there is some truth to that statement.  Koreans go well beyond conservatism when it comes to home comforts in public places.  In public schools, only the classrooms are heated.  The hallways and bathrooms are the same temperature as outside.  When you go to small owner cafe shops, you get personal heaters.  Don’t believe me? 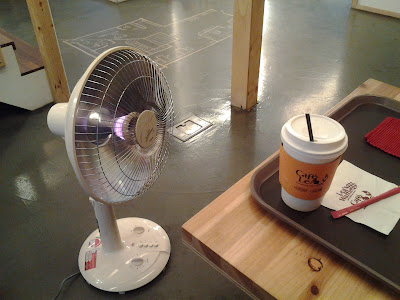 Small heater while we drank coffee

So, despite the joke that could be construed as seemingly cruel, there is a spark of truth to it.  This is reversed in the summer sorta.  Despite GOVERNMENT HEAT WARNINGS, they will still keep school open, along with the windows, and not run the AC.  They just take conservatism too far IMNSHO.

Apps for your smartphone that keep track of how long you have been dating, pictures of you and special events.  A friend of mine showed me one such app and I was stunned.  The younger generation really takes their dating seriously.  I’d call it OCD in many cases.  OH the stories I have heard.  One guy came home to find her girlfriend in his apartment.  When he asked what she was doing there she replied “I just cleaned up the place and was going to make supper.”  Sure, this all sounds great but when he told me “I then asked her how she got the door code, she said she just watched me punch it in.” along with “I’ve cleaned up many times.” Anyone else currently hearing the psycho dramatic music right about now? 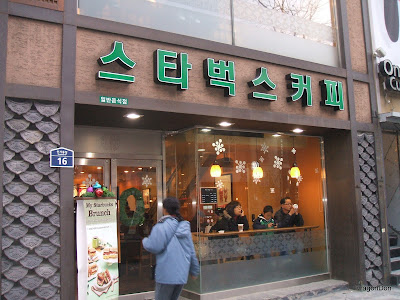 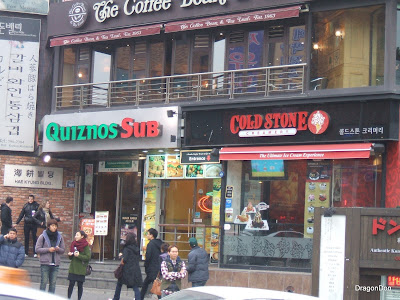 Had to get the sun rays poking through the clouds 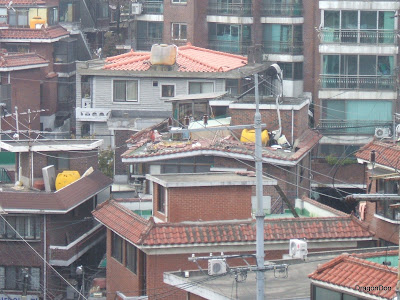 Karaoke is huge in Korea. So much so that it is to the point of having places that rent out rooms by the hour with large TV screens and speakers, 2 microphones, bright flashing & lazer lights decking it all out. The cost is relative to the number of people going into the room, the more the people, the higher the cost. On Friday night we had 11 people and the cost was $28/hr. Cost per person is rather cheap and it was all good fun. Unlike North American places, you are quite allowed to bring in your own food & drink, in fact, drinking & karaoke are a social norm in Korea. Some people simply went across the street and bought some cans of beer (Case and & Hite) from the corner store. We all took turns singing (except for the 2 Indian guys…who coincidentally were the promoters of beer and buyers of Soju shots). After each song, the computer rated your ability on a scale of 1 to 100. I think the lowest score was 86. I’m am pretty sure the computer was biased and/or tone def.

2.5hrs later, and we were all thinking on moving on. There was talk of going to play ‘electronic darts’ which sounded good but I was getting pretty tired and so what Bharati. So we said our goodnight and grabbed the bus home.

Saturday was a blast. The plan was to go to Itaewon, check out the shops and price out some things we will be buying soon (running shoes in particular). We hopped on the bus at 10am and 1.5hrs later we made it. Along the were a few nice Korea oddities which just _have_ to be mentioned and a regular thing I’m sure in future blog posts…

First up: Mountains. While this pic isn’t the greatest shot, it does give you an idea of what you can see by simply walking out your front door and looking down the street in many areas of Uijeongbu (not to mention pretty much anywhere in Korea).

Besides being a geek, I am also a car guy. While in Korea, I am fascinated by the cars here. The Koreans have evolved their styling way beyond ‘cheap asian cars’ and ones that I highly anticipate owning due to the simply awesome designs. But this picture ain’t about that.

Besides finding it very interesting to see North American cars over here, this one simply has to be shown.

When I was here 3 years ago, I saw a couple of 300C’s and they were all diesels. This one was not and from the sound of the touted up exhaust, it was a 3.5 V6 at best. But the GUY driving it was all tough and with the bumper-to-bumper traffic, he waited back so that he can simply floor it and annoy everyone else around him. It was a painful part of the morning.

Now this I found to be both highly amusing and infinitely practical.

Instead of overpaying some city worker to stand there and warn traffic of the obvious, why not have a fake guy waving people a warning light? Smart idea that I think.

Itaewon is a very large tourist shopping area. With that comes all kinds of street vendors and massive numbers of stores. A friend of mine collects belt buckles and there was one vendor who specialized in them.

These are actually lighters but certainly to raise some questions with authorities when spotted.

A Knife buckle and a skull with multi-coloured flashing eyes.

While purveying the many fine wares, I saw this cool hat with a Dragon on it (go figure eh?). When I asked how much, he said 18,000KRW (about $18CDN). I decided it wasn’t worth that much and moved on. I saw the same hat again at another vendor and got told 12,000KRW. That was a more reasonable price so I grabbed it!

Seems to suit me quite well I think!

Of course with all the tourist stores and food, there were bars. This one had a cool Greek name, which should have been an indication of what was to come.

On the side was a more description of who their clientèle is.

After browsing a bit more, we headed on over to Insadong, another tourist showing area. I just had to get more pictures of the Toy Museum. Unfortunately the camera card got full half-way through the store (Bharati hadn’t unloaded the card in a while….). Dave, these pics are for you:

Further down Insadong there were these girls giving out free hugs.

It wasn’t much of a hug really. In Korea, unfamiliar men and women do not hug. It’s very awkward for them and so was this so-called ‘free hug’ that I got. But hey, thought it was rather amusing and decided to give it a shot any ways.

A little later on and the Lantern Festival was underway. I was able to clear out a few pictures to make room for these. Hopefully net year we’ll be able to get more pics of them. You will note that the pictures were taking from above. We were at street level and there was a walkway beside the river. There was a huuuuuge lineup to go down the stairs to the walkway. Maybe we’ll get there early next year to get closer and more pictures.