Google CEO Eric Schmidt touched down in South Korea this week. The tech exec was in Seoul to announce that the Internet giant plans to actively promote the Korean alphabet, Hangul, amid the rising popularity of K-pop around the world

Note:  Eric Schmidt is a former CEO.  Mistake from the article.

Ok, I’ll do my best to make sure this is the last North Korea topic for a while but in reality, you never know what those crazy buggers up North will do.

So let’s review some things and see if you can pick out the crazy things I see happening.

North Korea Launches rocket (See history up till March of last year here)….it explodes shortly after take-off.  My intuition screams sabotage but I have zero proof of that.

North Korea launches second rocket…it works fine.  Reports of it ‘tumbling wildly through space’ or it will only be ‘able to take nothing but grainy pictures’ but nothing confirming either contradictory statements.  Who really knows what it’s doing.

North Korea publicly proclaims the detaining of an US citizen for ‘unspecified crimes’.  The timing is just a little too close to the previous event.  I suspect that in order to prevent sabotage, North Korea used the ‘hostage’…err….detained citizen to guarantee that the rockets gets off the ground but again, this is just my intuition.

Google & a former US politician visit North Korea.  One to talk about the detained citizen, the other to talk about…..well, not really clear on that.  One would presume business and technology but given the highly restrictive nature, and Google’s habit of betting on the future, it could only be to make sure that Google gets their corporate foot-in-the-door before anyone else.

Google then allows people to see a bit more inside the ‘hermit kingdom’ by updating Google Maps images of North Korea.

So, what will be the next move?  North Korea proclaiming ‘space superiority’ by show-casing some ‘liberated’ shots of the earth from its satellite?  There are already tons of reports about their readiness for a nuclear test.  Wonder if the UN will simply put forth yet another ‘resolution’ against North Korea, which doesn’t seem to be doing much except costing a lot of money for paperwork.

Well, it seems that the delegation that went to North Korea made it out without incident but not without stories.  Eric Schmidt’s daughter, Sophie Schmidt, explained a lot of details about the culture and way of (staged)life that was shown to them.  Quite a humorous take on it I’d say.  Read up on it here (if you can navigate the convoluted way it’s setup).

The best part I liked was the cartoon she posted.

Word has it that the Richardson is pressing for the release of Pae Jun Ho, an US Citizen, for “Unspecified Crimes“.

What should concern people is that right now, tensions are a little high after the missile launch and the threat of a nuclear test being performed we don’t have an official GOVERNMENT visit to work things out (although, given the history of such and the following obvious failures…) we have CORPORATE interests gallivanting about the world, making ‘nice, nice’ with ugly neighbours.  Seriously, this smacks of the whole shift from a Democratic rulership to a Corporatocracy.  It’s not like we weren’t warned about this, publicly, in the 70’s.

This movie is one of my favourites and this scene is nearly as famous as the “Mad as Hell” scene.

So, back to my current northern neighbours.  What do you think the outcome will be?  Will Google be allowed inside the ‘hermit kingdom’?  That place where the Internet is so tightly controlled that only a select few are allowed to use it?  Somehow I doubt that will change anytime soon, given how tightly controlled the state media is.  Or should I say manipulated?  Were you aware that North Korea WON the World Cup in 2010?! (Despite Spain actually winning it seems.)

So what to the South Koreans think of the North Koreans?  Oddly not much.  There is a well know pattern that North Korea hypes up some event, threatens ‘Seoul’ with retaliation and then….fails to follow through. North Korea is like the boy who cried wolf all the time.  Sure some ‘spikes’ of interest show up (Kim Jong Il dying, Rocket launch) that get people to talk a little bit, otherwise North Korea is fairly well ignored by the southern populace.

I have met some Koreans whose families originate from North Korea (English teachers from South Africa actually) and they don’t seem any different from any other regular Korean really.  So it’s back to the big, egotistical Military types running the place and making big chest-pounding displays of strength while the rest of the people go ‘meh’. 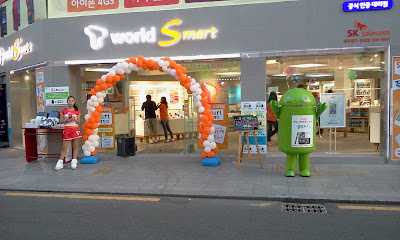 For those who are less than technical, the little green android represents the operating system that runs a lot of Smart Phones which is called Android and it is owned by Google. Here we have someone dressed up and parading in front of a store in Dageu.