Is South Korea’s government’s power-saving campaign, which has included drastic measures like turning off air conditioners at 19,000 public organizations, to blame for the rise of “refrigerator pants?”

I hope this trend does a quick death.  Hurts my eyes.

Korea has pushed real hard for their people to be conservative. Even to the point of suffering at times. Some of it on purpose, some of it by design. Lets take something as simple as a bathroom.

This is a typical apartment bathroom is a single n bachelor placed, this is the bathroom from our first place actually.  There is no tub, there is no dividing wall/glass doors. Everything just gets wet.  Trying to keep a place dry is a task that is daunting.  A friend once asked us how we keep our bathroom so dry.  I told her we keep the bathroom fan running nearly all day and the door mostly closed. It’s the only way to generate any airflow to draw out the moist air.

See, there is no central heating.  There is only floor heating.  It does an admiral job but all that humid summer air just sits around.  You have to buy a fan to move air throughout the place and even then, there will be done dead spots that will start growing mold.

How do Koreans deal with it?  By opening up windows.  In the middle of summer or winter.  It is insanity at its best when your conservative nature goes so far that you open classroom windows in the dead of winter or during the hottest and most humid part of summer.

I won’t even go into details how all the young girls wear skirts and don’t zip up their coats then complain that its cold during winter.  Fashion sense ranks higher than common sense it seems.

There is certainly no lack of places to shop in Seoul and Dongdaemun is where you want to be if you are into fashion, especially if you are female.  My wife wanted to buy a skirt that was good enough for both winter and a wedding.

The area is very pretty and right now they got a large light pyramid in front of a major shopping building.

As well as a tasteful theme continuation on the building itself.

In this area it is nearly impossible to figure out where anything is. So just pick a place and wander around.  If you live here, and come often enough then you will get to know where all the good deals are.  I am still working on this.  Haggling is a skill that you should develop ideally, unless you don’t mind paying the inflated and outrageous prices.  Many items have no tags on them and it is quite common for foreigners to pay significantly more.  If you know the language, you’ll more than likely get a discount but certainly less than a local.  I remember once when I wanted to buy a new carrying case/bag for my books, netbook and my Galaxy Tab.  We were in Namdaemun, another shopping area, and one of the first places we checked had bags but they were asking nearly $70.  I had only brought $40 with me and decided to shop around.  Most places hovered around the $50 range but still nothing I really liked.  We had decided to give up and we decided to leave and check somewhere else another day.  We had to walk buy the first store and the same sales guy was there.  He saw I obviously didn’t buy a bag and was urging me to come back inside.  I told him the prices were to high.  He asked what I was looking to spend and I told him I only had $40 on me.  He asked me to point out the one I wanted and sold it to me for that price.  In case you missed it, that is a $30 discount on the originally quoted price!  Sometimes haggling is just ready to walk away and tell them what you are only willing to spend.  Still, I bet a Korean would have gotten it cheaper.  It’s just par for the course being in a foreign country.

We went to the Doota World to see what was there.  It is always a busy place and does have a floor dedicated to mens fashion.  This pic is an example of a typical section of women’s fashion.

Now because it is Korea, you will always see clothes with English on it, most times it makes zero sense. Sometimes you can understand what it says but still you scratch your head wondering who would wear something like this?  And this one is logical, kinda, in its use.

We then ended the day out at a TGI Fridays. A place known for ribs but were sold of then, as well add beef burritos. For a place with a fairly limited menu, this is annoying. Wait they DO have burritos. New guy waiter was confused. 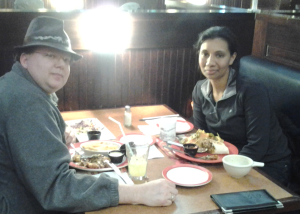 More bullshit numbers in the news.

South Korean men spent $495.5 million on skincare last year, accounting for nearly 21 per cent of global sales, according to global market research firm Euromonitor International. That makes it the largest market for men’s skincare in the world, even though there are only about 19 million men in South Korea. Amorepacific, South Korea’s biggest cosmetics company, estimates the total sales of men’s cosmetics in South Korea this year will be more than $885 million.

huh? You mean to say that every one of those Korean men spent $26,000,000 on makeup? Seriously? The average income is significantly less than that. Wanna try that again Winnipeg Press?

I can back up each of my claims. Can you? Or are you just another mainstream media parrot? Can’t you at least afford to have people write decently researched articles?

Questionable fashion. Some of the clothing here, typically the ‘older crowd'(and by older I mean 60+) their choice of clothing becomes impaired it seems. Seriously, who buys these kinds of socks and thinks they are a good idea?