I rarely see a doctor. Not because I have anything against them or some weird aversion to the medical profession. I generally don’t get sick. Sure I am a little overweight , and being Korea has helped that due to all the extra walking one has to do to get around I have been slowly loosing weight but also gaining some muscle. So technically I am loosing weight be gaining mass :) just to clarify the difference. Your weight is what changes when you go to the moon but your mass stays the same.

Last month something happened to my knees. It is like I over worked them. I figured a few days of rest and it’ll be fine but therein lies the dilemma of being in Korea. There is much more walking, stairs to climb for exercise but what do you do when its your legs that need the rest? Unfortunately I do not have the luxury of sitting around for 3 – 4 days and do nothing. So the healing becomes a significantly slower process with the possibility of doing more damage without really helping at all.

While at a movie two nights ago, I was about halfway through I was getting some pretty severe pain in my right knee. To the point that I was considering leaving the film. If I could have just stretched out the leg I would have been fine but the seat in front of me only afforded me limited flexibility.

So I went to see a doctor. I have always been partial to alternative healing and I knew of a place near a Korean friend of mine that did acupuncture. My friend offered to help with the Korean. While they did speak English, they were better at explaining things in Korean and my friend explained in English.

The treatment went as follows:

First, I should mention that the bed, while somewhat stiff, was heated. Very comfy but only to a point.

The doctor placed four rubber suction cups at various locations around my knee. These cups had lines attached to them and had sponge on their insides. The machine applied both a vacuum and an electrical stimulus to the knee area. There was also an infrared lamp over the exposed knee as well. It was rather unique to experience such a treatment. 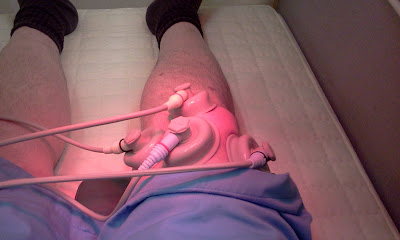 After about 15mins of the suction/electrical shock that varied in patterns my knee was feeling pretty good but we weren’t done yet. The assistant places a towel wrapped hot pack in my knee and leaves then the doctor returns in about 5 mins or so.

NOW they brought out the acupuncture needles.

He put 5 of them around my knee then attached alligator clips with wires to them. More electrical shocks to the muscles it seems. 15 more minutes with this. Feels a little more intense but not painful. 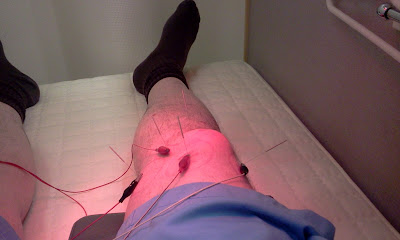 The assistant comes in and removes everything and informs me there is one more step! I am wondering how much more work can be done?! She tells me it will hurt a little but not to be concerned. I shrug, certainly won’t hurt more than what I have experienced from the pain in my knee a few days ago.

The doctor comes back and has a couple of weird things I’ve never seen. One of them looks like a hand pump and a little add-on looks like a suction cup type of device with some gauze in it. There is another hand device but I can’t quite make out what it does. The staff is very good at not making it obvious. The doctor swabs an area just left of my knee and takes the other hand-held thing and pricks my skin about 8 times in rapid fire strikes. Ok so that kinda stung. I watch the doctor place the ‘suction cup thingy’ over he area and then attach the hand pump, he pumped it a few times and then left for about 5mins. My leg bled slowly into it and the gauze was soaking up some of it. I just kinda watched with a bit of morbid fascination and was amazed that ‘leeching’ was still practiced on a daily basis.

The doctor came back, removed the suction cup thingy cleaned up my skin a bit and left the assistant to finish. I asked her what was the purpose of that and she it was too hard to explain in English(her English was pretty good).

Then they let me go. Since this procedure was covered (and by that they mean mostly) by the Government, it only cost be KRW8400(about $8.40).

My knee did feel better and there is supposed to be a follow-up for the next three days bit I have plans already so I’ll do it next week.

I was told that this is only a symptom of a larger issue which is not necessarily related to my weight. Who knows but I’ll be keeping an eye on things.