In March I posted a mini-contest to see who could interpret some Korean characters and what the English word was. This is the word.

The word is bus but pronounced bus-uh. In general, Korean words always end in a vowel so English-based words, for which there is corresponding Korean equivalent, get some added sounds. Learning the sounds of each character is pretty easy. I can read quite a bit of Korea but my comprehension will take a while yet :) Still, it is useful for the ‘konglish’ words like bus :)

Here is Shawn opening the parcel.

The box looks like it had ah been in ah some kind of ah Tsunami AH! The cardboard just fell apart. ( as you can tell ah I am writing ah this with a Korean accent …..AH)
My CHOPSTICKS ah… how nice, thank ah you very much! Enjoy da picture ah.

The city bills itself as the ‘Colourful City’. Well, we weren’t disappointed. Although I find all the cities here very colourful. I will apply this ‘colourful’ term to the types of things I see here. As mentioned before, and pretty much common knowledge, Asians tend to copy till they figure out who they are instead of trying to be popular like the Western stuff that influences their young people. So when I see a posted for a Korean James-Bond type of movie, I immediately took a picture of it.

Of course the ‘walking mascots’ are very popular for promoting some product or event too. Don’t ask me how Winnie The Poo is connected to anything in Korea though. 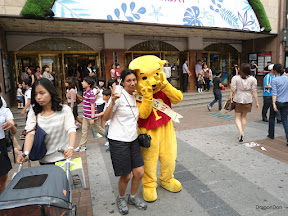 There are many different shops in this area. Korea has done some great things in designing their downtown cores. They block off streets and cobblestone the whole place. It makes for wonderful shopping experiences and a cool place to hang too.

So tell me, is this t-shirt from a good artist or a great artist? 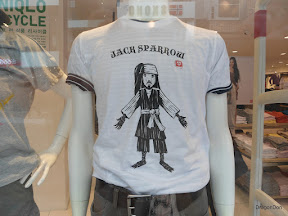 You probably don’t need to answer that…

Remember when I wrote about Coffee in Korea? Well, if a massive 3-story coffee-house doesn’t prove that Korean’s love coffee, nothing will! 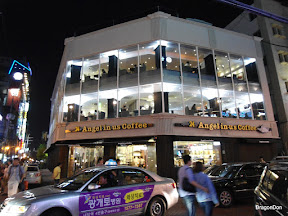 A few blocks away and this same chain had another 2 story place as well!