In today’s world, we literally are more connected than ever before. The vast majority of it is random when you think about it. Random in the sense that it’s not a purposeful connection, but more by someone else’s design. Sure you have a few friends on Facebo….err…that other marketing name they are trying to steal from the Meta Company in which there is a new legal battle going over but I digress.

The vast majority of ‘connections’ are not personal, not cultivated in any sense. You are simply just watching TV 2.0. Reading someone else’s thoughts, and ideas. That’s how our world is right now and it gets into everything.

I bought a scarf from Amazon. I received it the next day, thanks to Amazon Prime. I noted that it was made by a Chinese company.

This is not a problem itself but that same day, I received a voicemail that was all Chinese. This is marketing at it’s creepiest/automated-ness.

This is just like the time I got a voice mail from Japan! We are insanely connected in this world.

I’ve been doing a lot of trimming of my connections. Focussing on what I need to do, not what others need to feed their egos. This has been building for far too long and it is panning out. Got some interesting things to share soon ;)

LinkedIn loses its third-largest market as it sunsets services in China.
— Read on www.ibtimes.com/linkedin-waves-goodbye-china-introduces-new-job-platform-amid-stricter-regulations-3316631

Funny, they seemed to have left out those Premium Subscriptions that would be lost. Huh.

Comments from politicians like this are too much to ignore and mock.

Needed to get that out.

For those out of the loop:

Dec 1 – Meng is arrested in Vancouver, BC at the request of the US authorities.

Jan 2019 – China sentences Robert Lloyd Shellenberg to death after it was suddenly deemed that his 15 year prison sentence(since 2014) was ‘too lenient’.

In a ‘tit-for-tat’, China does the same for travel to Canada, citing Meng’s arrest.

(I swear to gods that politicians are nothing but 12 year olds in middle school….)

Jun 2019 – China suspends all import of Canadian beef and pork.

Sep 2021 – Meng is granted release. Hours later the Michaels have been released. BUT it wasn’t related to Meng right? RIGHT?!?!

There are more details, this is just a high-level view. Feel free to google it if you like. As for me, I’m firmly in the Apple Camp, so will never buy a Huawei device ever.

Sadly, this will be a regular thing.

In my 3.5 years of living here, I have seen China’s attitude towards North Korea change in the following order:

I suspect more news propaganda to appear and something to happen within 3 years at best.

BROKING (AFP) – Beijing’s military accused Tokyo of a “highly dangerous provocation” by interfering in Chinese live-fire drills in the Pacific last week, warning that Japanese lives could be at stake, state media reported

Now where have I heard words like this before……hmmmmm……

My inlaws came to Korea to visit.  We only had 4 days so what we could see was somewhat limited but enough to give them a good taste (no pun intended) of the country.  We saw some temples, some fortresses and some of the good tourist places (we avoided Itaewon like the plague).  Sat night we went to see a play.  Miso, which means smile in Korean.

It seems that my wife reserved tickets for Sunday.  Luckily we were able to change them.  We got the back row and then the pre-show started before we were in our seats.  As a permanent show, it is popular with tour groups. So it want surprising to see a whole bunch of Chinese tourists waiting to see the show.

What was surprising was to sere them sitting in the seats we just purchased. Then refusing to move saying “stay together” as the Chinese chick indicated to the row in front of her. So we get one if the staff who had to continuously and insistently ask them to move. Ooh the howels of protest that brought. Seriously. Theses people just literally decided that the seats at the back were better and moved there, then proceeded to argue with the theatre staff on why they should be allowed to stay. It was pathetic.

And just to clarify, we weren’t the only ones who wanted the seats we paid for.

Eveeeentually they moved. Not without some dirty looks, to wit I returned equally. Then later on, when they were finally seated down near the front, when ever one of them turned back, I smiled at them and waved happily. Welcome to the truly capitalized world Chinese tourists! Where we sit where we paid for and not move around on a whim.

Yes indeed, I smiled, just like the play name.

When you are in an Asian country for a while, you will travel.  If you do not, then please read “Why are you in Korea?” and learn.  To that end, people gather things from around the world including candy. 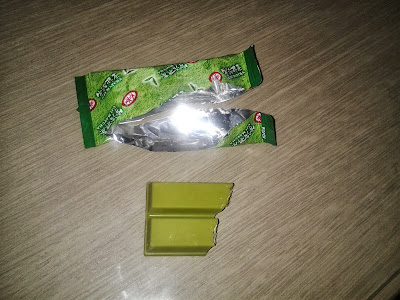 Yes, it’s a real Kit Kat, and yes, it actually tasted good.  This was from China, a friend went there and brought it back.

Well, I figure I should do more news reports.  So much is not known about things in this part of the world…or things that are related to Korea.

Report: 9 North Korean defectors repatriated after being caught in Laos, sent to China

SEOUL, South Korea — Nine North Korean defectors have been forced to return to their country from China after being captured in Laos, a South Korean news report says.

Laos had been assumed to be a safe route for North Koreans leaving their mostly poverty-stricken homeland. Activists say that defectors who are returned to North Korea can be punished or even killed by the regime, considered one of the world’s most repressive and brutal.

Surprise surprise.  I just can’t really fathom a country that goes to such great lengths of control.  It simply can’t last.

PYONGYANG, North Korea — New international sanctions aimed at thwarting North Korea’s nuclear weapons program are having unintended consequences: halting money transfers by foreign humanitarian groups working to help those most in need and forcing some agencies to carry suitcases of cash in from outside.

Sometimes I am a little mixed.  I mean, people should be allowed to do what they want but at the same time, if other people want to do something different, then it should be so.  If you simply cannot bear to think on you own and let someone else run your life, that’s fine by me but you should be aware of the alternatives and make an informed decision.

Dangerous double-jaw surgery on the rise in South Korea

A painful plastic surgery usually only performed for medical reasons is being embraced by South Koreans as the latest way to improve their appearance.

Double-jaw surgery is a radical solution to correct facial deformities and is usually carried out on people who are unable to chew properly due to an excessive over or underbite.[emphasis mine]

First, I could easily tell from the pic that it was a fake ‘before’ image.  You start to see these ‘advertisements’ all over the place where it’s rather obvious the ‘before’ pic is simply an edited version of the ‘after’ pic.  I especially like the one poster where they changed the size of the ‘after’ to make it look even more dramatic :)