At first glance, one might be tempted to think that this is just another cleverly named place to hang and get coffee. You would be right but it is much more than that. This is one of those ‘truth in advertising’. 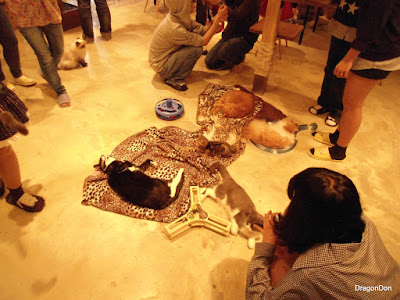 This is a cafe where cats live. Supposedly people bring cats here off the street and such. These cats were well looked after, although I found the cafe much too stuffy in air quality. Still, they were mostly playful and/or lazy :) Some could care less about the ‘hoomans’ roaming about trying to pet them or play with them. One more than one occasion I saw a Korean trying to get a cat to attack the ‘feather on a stick’ toy, to whit the cat summarily ignored it. 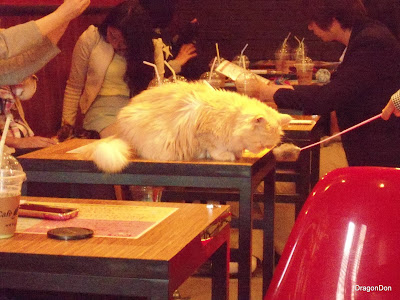 The cat’s eyes are quite closed and he is having a nap,or trying to. I decided to get a better pic of him. 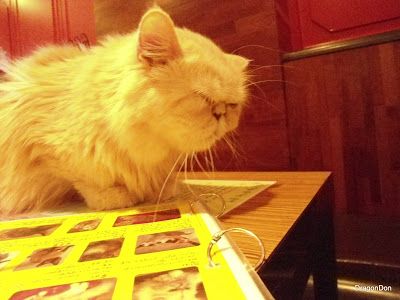 He looked like a real grump of a cat but in reality, it was one of the most friendliest. He loved attention and didn’t mind being petted or scratched while he was sleeping. 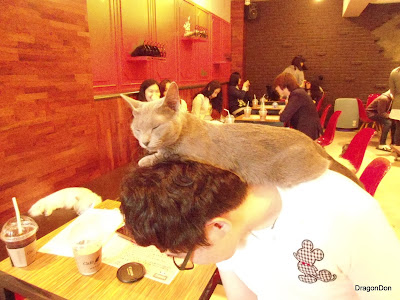 This little guy lived in his own world where humans are seen and nothing but furniture.

Not content in trying that Korean guy out, he made his way to our table too. 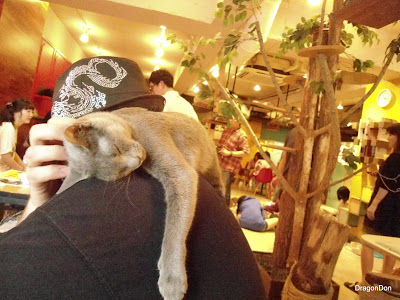 Maybe this guy was a parrot in a former life and just liked to perch of shoulders? In either case, he was the favourite of the day for obvious reasons.

The cafe charges you 8,000 won to enter and you get one free coffee or pop with that. The money goes to help keep the cats fed and such. They also offer a ‘cat motel’ for when you go on vacation and have no one to look after your kitty. They also have an adoption program for them and in the pic above with them ‘grumpy’ looking cat, you can see the booklet detailing the cats that you can adopt.

There is still a bit of a stigma around cats. Back home, the superstition is mostly about black cats, typically stories around Halloween, but here is all cats. There is a fear that cats can see your soul. Well, if they can, good for them! This one obviously likes mine :) In fact, he was so happy that he was playing and biting me. I had to assure him that I was still to fatty for his tastes by scratching his head. This seemed to appease him greatly and so he let me live.

Here you simply cannot call a cat over to be petted. The ones you see on the street are ‘wild’ and do not trust people. It is sad.

Now THIS guy was an interesting fellow. 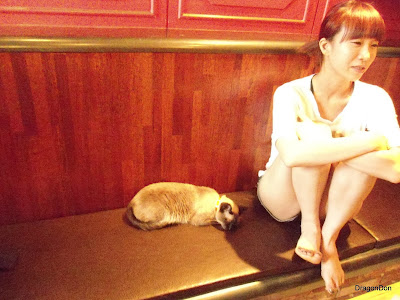 He wanted to be near people but wouldn’t let you pet him. He even got so bold as to get onto one of our friends lap but the moment she tried to pet him, he swatted her and bared his teeth with a hiss that spoke “Hey! You are here for MY amusement and pleasure. I’ll tell you when you can touch me, which will be never by the way!” 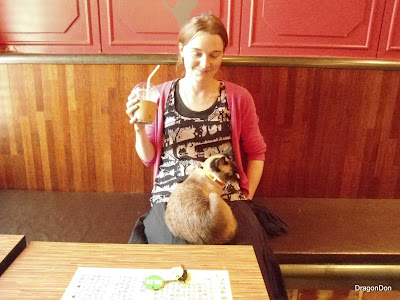 On the flip side of cat psychology, you have this guy: 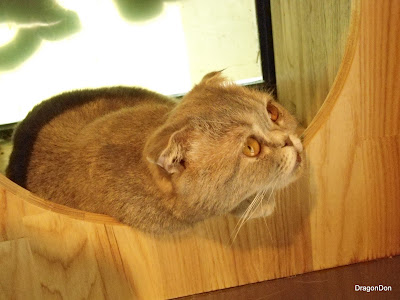 His ears were always down like they were formed that way. He was the saddest, most heart-wrenching looking guy no matter where he was.

Here is the whole album, including a video of the guys.