Made it here without any real issues!

4.5 years seemed to have come to an end fairly quickly.  Don’t worry, will continue the adventures even after I leave here.  Stay tuned to find out where I’ll land after going home for awhile!

Sorry things have been quiet, ‘stuff’ has been going on :)  We are moving as my wife has a new contract starting in March.  So it’s packing all kinds of things.  I still have my Makerspace to finish packing things up and ship back down this way.  This weekend should finish that all up.  Then there is packing our place here, take a trip home and come back to make sure everything is packed for the move.  Still don’t know how we are gong to actually move just yet but that will get sorted out in Feb.  No big deal really.

Not terribly looking forward to seeing all the snow back home given that our temps here are hitting high-single digits this week and not a flake of snow.  Warmest, Christmas, Ever.  Love it!

Well, it’ll be nearly 17 months since my last visit home so it’ll be nice….almost.  See, my last visit home was during the summertime…this time…Winter.  What kinda makes this worse is that where I live now, it rarely gets below freezing and rarely gets snow.  From that to go to Canada during January?  Well, at least it won’t be as bad a February’s are.

Ok, so I’ll be in Canada from Jan 14th to the 28th.  I know that at the weekend of the 18th we’ll be in the Ottawa area.  Outside of that, I’m fairly open to meeting anyone in the Golden Horseshoe area or in the Ottawa area if you live that way too :)

The rough plan is to hit Toronto on the 16th(Thursday) and meet up with people there in the evening at a restaurant.  Then Friday we head out to Ottawa, stay there till Sunday and come back.

I’m staying the next weekend but my wife is not.  (oddly it’s the same price for me staying 3 more days…).  So I have one more weekend back home as well.

Will be nice to have a Tim Horton’s coffee again :D  Oh…and see friends/family too ;) 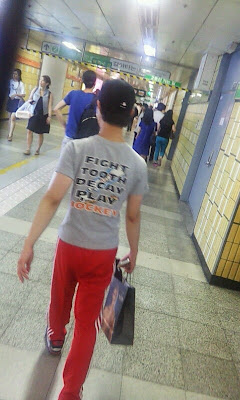 I have a friend here who volunteers teaching English at a North Korean school.  I mentioned that I’d like to teach computers and would be willing to do some at the school he goes to.  Today he took me there so I can meet the person who runs the school.  It seems the guy in charge didn’t think it would work out, mostly his reason was because of a language barrier(my Korean is still not quite conversational) but I think that is a wrong way to view it.  I believe they could overcome that and it would be a great chance to exchange language, culture and love of tech.

My friend suggested that I talk to his students at the end of his class about Canada.  So I waited around and when his class was nearly done, he came to bring to his students.  We decided to talk more about computers and what the North Korean students knew about them from their home country.

First let me tell you about the students themselves.  They are all young people, about their late teens to early 20s at best.  There were 5 of them, 1 girl and 4 boys.  The girl and one guy were sleeping.

“I let them sleep, given the hell they have gone through.” said my friend.  I can’t say that I blame them.  I also can’t say that I could ever truly know what they have been through.  One of the boys said that if they left their town, they would be killed by law if they were caught.  So yeah, not exactly a fun place to live and it is most likely that whatever family they left have already been killed to make an example of those that have escaped.

Ok, back to computers.  One boy said that they were shown pictures of a computer, told to read some material then given a test to write on what they learned.  Not so much a computer education class but more like a ‘computer awareness’ class it seems.  Another boy said he was able to play a game on a computer once.  No, I’m sure it wasn’t anything like Skyrim but probably something closer to a 90s style game but we didn’t go into details.  The first boy said that the person who had a computer was a ‘rich person’.  I told him that I had 8 computers at my club but definitely wasn’t a rich person.

My friend had them tell me where they were from in North Korea and I used my Galaxy Tab to bring up Google Maps.  Using the Satellite View, we were able to see some pretty amazing details on streets and houses in his home city.  Sure, it wasn’t Google Street View but the details were a lot more than I had anticipated.  The first view was just the standard maps view, which showed not much at all.  I decided to switch to Satellite view and got some real definitions of city objects.  The one boy showed me the statue of Kim Il Sung in his home town, his elementary school and the place where he played football.  What struck me as being surprising was the overall design of the city.  It was like any other city you may have seen.  There were a fair number of houses and any other number of buildings you would expect to see in a mid-to-small sized city.  This lead me to immediately realize how much ‘anti-North Korean’ propaganda has been fed to us.  Sure their lives aren’t exactly rosy and they certainly don’t go on family vacations to the beach on the other side of the mountains but despite that, the city looked absolutely normal.

I do hope that I have an opportunity to help them out with the skills I have but I suspect that I really could use some better Korean any ways.  It was an enlightening experience any ways.