I have mentioned about Korean Banking before but despite that, I never talked about the setting up of an account.  Warm up those neck muscles because you’ll be shaking your head quite a bit I think.

I think quite a number of you might have owned a house/mortgage at one point in your life.  You know, that money you sign for with interest that ends up being worth three times more than the house you bought?  It’s no small commitment and the penalty is rather severe if you decide not to honour your agreement with the bank.  There is some paperwork to be signed that pretty much guarantees your soul to the bank if you try to skimp out on a payment.  If you have to go with a CMHC loan as well, just one more nail in the coffin that keeps you tied to the financial institution as well.  Have I stressed how enough how important this kind of thing is?  Good.

I live in an area where fishing and agriculture are predominant.  The Government has somehow setup banking chains that are geared toward each industry.  If you are in agriculture, you sign up with NongHyup bank and you get perks/discounts.  If you are in fishing, you sign up with SyuHyup bank.  I find this rather an interesting way and I don’t really know how much the Government is involved with this setup but it is interesting to see how the Government seems to support major industries by doing so, thus also keeping the Banking industry with a steady flow of clientèle.

When I was in Uijeongbu/Seoul, the bank to use there was KEB because they were the most ‘foreigner friendly’.  So that is who I setup my first account with.  They had a reasonable number of outlets, if sometime inconvenient to get to occasionally.  I have mentioned before that in order to do much of anything with your account, you have to ask for each feature.  Want to use the bank machine?  You have to ask for that and setup a pin (#1).  Want to do shopping at a store?  You have to ask for that type of card and setup another pin (#2).  Want to do Internet Banking? You better make sure you ask for that and setup a pin(#3) AND an ID(number/letter combo).  Want to use your card at another machine?  Yup, you guessed it, you have ask for that option.  Think you might travel and use your card in another country? Well gee, do I even have to keep typing ‘you have to ask for that’ any more?  I also need to mention that each of these have a section that you should read and sign that you understand the terms you are agreeing to.  Seriously, I did less paperwork for my mortgage than I did to set up a new account with NHBank!

OK, now when you are in Korea and you have a smart phone (or Galaxy Tab) the next thing to do is to set up your banking app.  KEB makes it pretty easy with an app in English.  NHBank….not so much.  So like any other lost waygook, I asked for help and had the staff walk through the process of setting up the app, in Korean, on my Galaxy Tab.  I’ll figure out how to use it eventually so might as well have it there and learn more new stuff.  After another 15mins, with the enlisted help of another staff who did not speak English, we found out that we could not setup the Internet Banking App because I already had Internet Banking setup with KEB.  Now, the problem wasn’t because I had it setup, it was because Korea uses some special ‘certificate authority’ to add some layer of security to online transactions.  This is pretty good but my problem was that I had set it up on my Galaxy Tab and found out that in reality, it’s nothing more than a pain in the ass.  See, when you log into your account through the app, you type in your created account ID and then enter the password.  When you setup this special ‘certificate authority’ you only enter the password you created for that process.  Well, this is kinda stupid because now if someone gets my Galaxy Tab, they only need ONE piece of info instead of TWO!  So I stopped using that as a sign in.  Then I reset my Galaxy Tab, installed the KEB app but never bothered with the ‘certificate authority’ process.  But because I had started it already, I could not setup the NHBank app till the other one was properly setup on my device now.  Sigh.

Are your neck muscles sore yet?  Now I have to set up my Galaxy Tab and go back on Monday to see about finishing this process.

Ok, so while we found this out, there was a bit of excitement in the bank itself.  I heard some woman screaming something and looked up.  There were some policemen walking a young guy out, he had his head hung down with that resigned look to his face, while I heard a ‘SLAP’ and saw the woman.  She apparently slapped the young man on the shoulder or something while he was being escorted out by the police.  She was fairly distraught, kinda/sorta collapsed down into a ‘frog-like sitting’ position.  The other policeman escorted her out the other door.

At a guess?  The young man was her son and had problem borrowed too much more, or stole some?  I asked the mostly English speaking staff member, he just kinda smiled and agreed with my guess.  Don’t know if it was true or not but…meh, it’s part of my story now.

The security in banking here is a mixed bag.  Sometimes it is overlook, other times it is laughable.

In Korea, you don’t pay bills, you transfer money to a company account.  Amounts to the same thing in the end but there is a difference, subtle as it is.

First, just to look at the bank website, you are forced to install their software.  It is a combination off key logger and firewall.  Last year the government finally the banks to let people use a browser other than only that insecure IE one.  This is good news :)

While online, the software monitors your habits, obstensively to make sure nothing ‘funny’ is going on that might compromise the security of the site or your browser.

What is interesting is that unlike North America (or at least Canada), you don’t automatically get internet banking.  You have to ask for it.  It is an added feature with no extra cost.  They give you this security card with a bunch of numbers in a couple of sets of columns.  When you go online, the website will ask for random parts of those numbers. 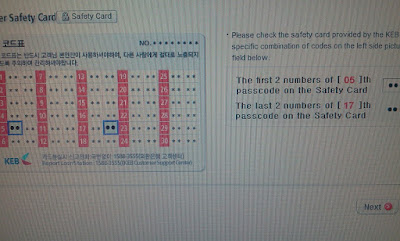 The card you have will look like this but obviously without the dots :)

Ok, so once you have mastered this little bit, you also need to know that you have to ask for shopping privileges.  Yes, it is also something you have to ask for so that you can use your card to buy things.  It’s almost like “Well, what the hell can you do with your bank without asking for a feature?”  Desposit and withdrawn.  That’s about it.

Now, back home we have these keypads in which to enter in our PIN code so that we can approve the purchase that it was done by us.  Reasonably secure.  Here, Korea decided to get all “high-tech” and go with a digital signing pad (like you see with the UPS guy when you sign for your package).  The sad thing it that it’s a wasted technology.  The Koreans, they just scribble any old line…with their finger nail.  They don’t even bother with the plastic stylus.  Hell, at one restaurant I handed the bill with my bank card (expecting him to bring a machine to my table) and when he brought me back the receipt I asked him about signing.  He replied “I already did for you.” with a pleasant smile!  Yeah, it’s a pathetic system which just means, don’t loose your damn card!  To be fair, it is severely unlikely that anyone would ever do anything and steal money from your account.  That is just not the way things happen here (unlike that time I lost $200 from my account in Canada because I forgot my card in the machine and the cops could care less about it…).

The other day I saw something new and something that every bank machine and bank website should have!

Sorry for the glare, couldn’t be helped.  This simple screen, shown when you chose the option to transfer, would severely cut back on those Nigerian Scams! 419 Eater does an amusing job at trying to strike back but having a screen like this would make a few more people stop and think.