Well this past leg was less eventful but still reasonably pleasant.

The 6hr wait at Kuala Lumpur went by quickly enough.   The airport is pretty nice too. I got some food at  Dome and then hung out by a Starbucks. The ceiling looked like a constellation of stars. 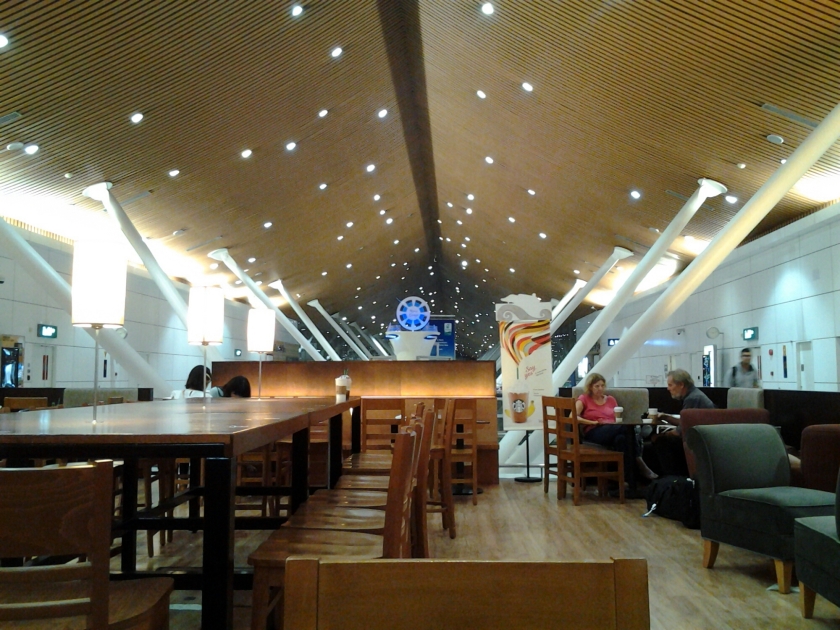 And that round blue wheel is a marker for the  “movie lounge”.  Go grab a nice comfy seat and watch whatever movie they have playing on the multiple large screens there.

On the plane,  I got to sit beside two Korean girls going to London on a vacation. I was able to use a little bit of Korean. The girl right beside me spoke English well enough but her friend was to shy. With a little bit of, encouragement and some silly Korean phrases on my part, she relaxed a bit and used some English with me. It was nice to see she was comfortable enough to ask me some questions while doing it the immigration forms.

I must say the food on Malaysian Airlines is not bad at all. They know how to feed you at the right times.

The plane was an  Airbus A380. Big plane with 3 seats on each side and 4 in the middle plus an upstairs.   They even got geeky with an exterior camera on the tall fin so you can watch landing and take off. Maybe not such a great thing for those who are  not “overly concerned” about flying. 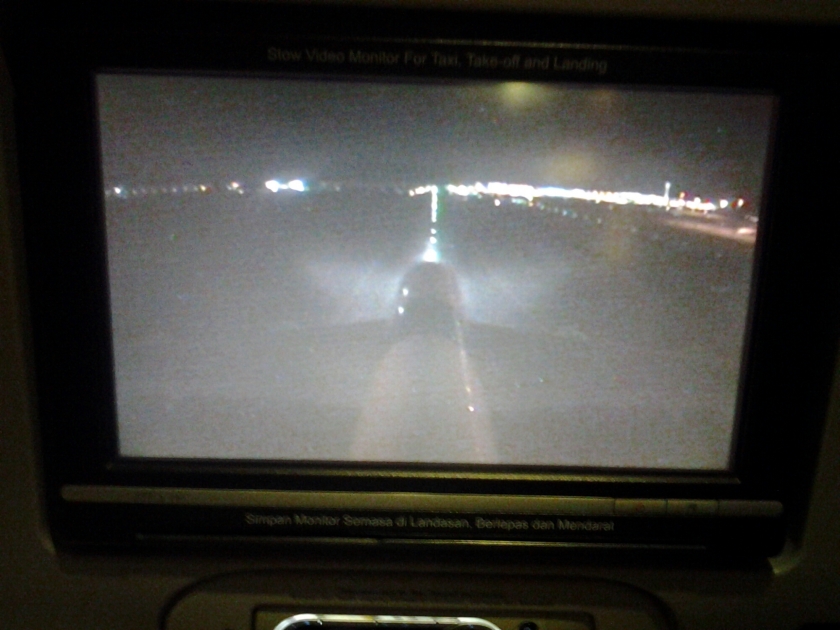 Movies watched for the duration of the 13hrs :

Got some more reading done on  The Hitchhikers Guide To The Galaxy series.

Got some sleep,  but not the greatest.  Just wasn’t terribly comfortable.  I like traveling more than I like sleeping. Then there was the issue of needing to go to the bathroom but not really wanting to wake up the sleeping girls.  I was able wait till they were awake though.

Other than that,  the flight was pretty uneventful.

Got to Heathrow,  got my luggage fine.   Customs was done then next order of business was  getting Internet up and running.   Found a machine,  bought a sim card and…. nothing.  Played for about  20mins and nada. So I have up and went to next thing,  mom’s suggestion of travel insurance.   Seems I could only get it at some special booth that wasn’t at this airport,  or buy it online.   Well,  since I can’t get on the latter,  I can’t do the former.   Right,  let’s get my bus ticket to the town in staying in.

Getting the ticket was easy enough.   It’s a 2hr journey.  Yay….

Decided to grab some sort of breakfast,  a muffin and a coffee,  then wait for the bus.

Total travel time from start to finish looks to be about 29.5hrs, door to door.  Total flight time was 18ish hours.

Looking forward to taking a shower,  shaving and getting settled.  At least it’s a nice, bright sunny day,  a bit on the cool side (relative to Korea of course).