It is a sad state to know that anyone who performs tattooing service is breaking the law,  technically. From my understanding,  the only person who is allowed to put a needle in your skin is a medically-trained doctor in Korea. That being said,  there are still quite a few tattoo shops around Korea, some even have advertising signs in public. I see it as one of those soft-hard laws.  Meaning as long as no one really complains,  you won’t get bothered by the authorities.

The whole stigma attached to tattooing is a left-over thought that only gangsters got tattoos,  which is obviously severely outdated. Still,  I have read stories of  people being banned from using the public bath /saunas because of tattoos. It’s even more of a ludicrous belief when you see advertising and people have tattoos in them along with the whole  k-pop singers,  which all the kids want to emulate,  that have rather large and obvious tattoos.

I got one taro about 7 years ago,  why seen my wife first went to Korea by herself  :D

This one needs going over again because it’s faded a little and there is a second part that I want to get done to this. Tattoo done by  Oz at  Cottage 13 in Hamilton, Ontario, Canada.

Now,  I did have an idea for a second tattoo after I came to Korea,.   The plan was to get it done when we went to Thailand in our first year here(2011).   I researched some places and contacted one of them.  When we went,  I dropped in and gave him my research ideas and description.  Since my wife forgot her  pre-paid credit card in Korea,  the extra money I brought had to go to our trip but at least I got the artist to sketch me up an idea. 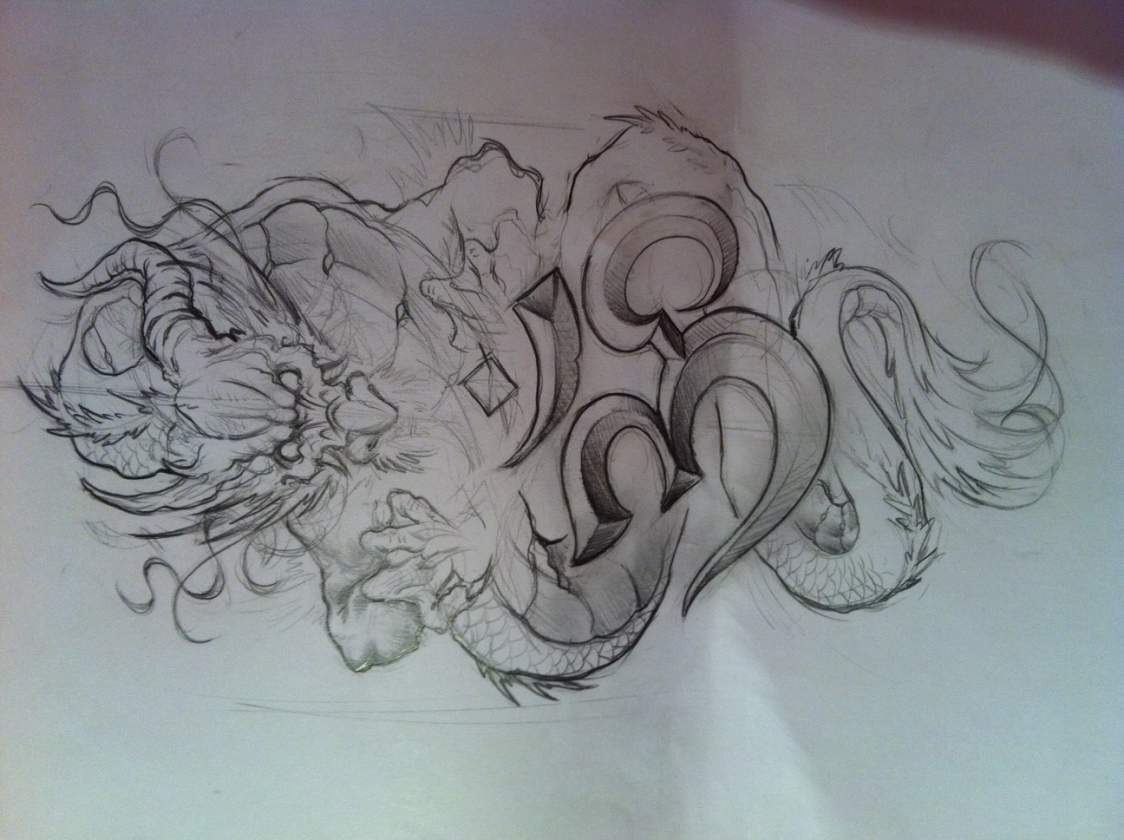 OK,  now I have a visual to work with but it won’t be for another  3 years before I revisit this again.   In that time,  I looked around for shops but I really wanted a referral.  This is a process you want to make sure the poison is good and respectable.   I talked to a random foreigner on a subway once, got a recommendation from him but never followed up on it.  About two months ago a friend of mine said that a Korean friends of his was coming to visit and that she had tattoos.   I said I would like to meet and talk with her.   I did,  saw the work that she had done and it was good.   They were done by a friend of hers in  Itaewon.   I got her contact info and meet her for lunch one day. From that,  I have her my research and the above drawing for her to come up with a completed design that I would like.

The biggest factor in this design is how I described the tattoo.   My drawing skills need a ton of work but my writing skills do a good job at describing my thoughts.

“The Dragon encircles an OM symbol with his forearms propping up the upper portion of his body on the top of the symbol while he gazes down upon you and lands forward as if to challenge you with the question ‘Do you know who you are?’ ”

Armed with my requirements, she came back with a design that I liked.

OK, now we have something to work with. This one will get a little bit of colour, the OM will be read and so will the spine of the Dragon. She suggested the belly be a light red but I will wait till the core idea is compete before I consider any further modification. The only thing left is to actually do the work.

5hrs later and we have the outline done. Damn did that thing hurt like hell! Seriously, I was not expecting that much pain. Since there is less fat between my skin and muscle in my leg , it really hurt. My arm did not hurt as much as this did at all.

That was 4 weeks ago. Last week I went to start round two, shading. Here is a comparison. Now, it will look darker than normal till the skin had properly healed. I’ll post up an updated pic in a few weeks or so.

It sounds funny, over the last week, the son has started to peel as the new son below finally healed. I was like a lizard shedding scales because it was only coming off in the shaded are and lines. I’m sure there is a metaphor in there somewhere right? :)

Sadly, the shading could not be competed as my son was “too stressed” and the tattooist said she would only be doing damage of she did any more work. 3 weeks wasn’t quite long enough for a proper heal it seems. So, now I’ll have to wait till I get back from the UK in September to finish this. Still, it’s pretty cool :)

2 thoughts on “Tattooing in Korea”