I have been fascinated with various spiritual beliefs for quite some time. I have studied many of them and last weekend I had the chance to experience, if somewhat peripherally, some Zen Buddhism. It was quite the experience and extremely physically taxing but we will get to that in a bit. I went with Adventure Korea and a group of about 30 of us. Only five of us were guys.

Walking up to the temple, you are greeted by some very handsome fellows. 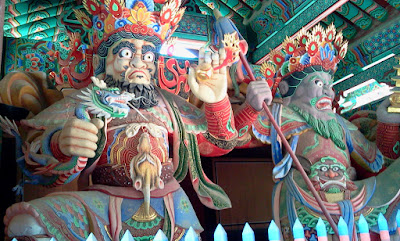 One of these days I will find out what the deal is with them. I had forgotten to ask.

Once we arrived, we were given ‘temple clothing’ to wear. Pants and vest.

One of the first activities was doing 108 bows while making a prayer necklace at the same time. 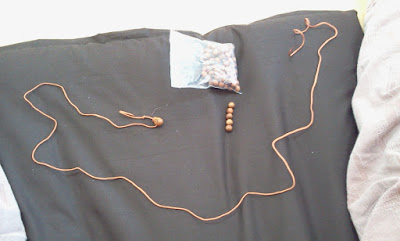 And for every bow, add one wooden bead to the string.

End up with this: 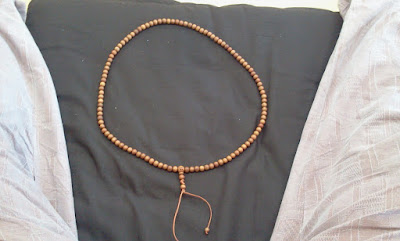 Sure it looks great and possible even simple, but the effort it took while doing so was killer. Here is a video of a Korean doing only 3 full bows.

Now, in the video he did it only 3 times. Our group did it 108! Each time we added a bead to the necklace. I was sore, I was sweating, my hands even began to tremble while trying to put the thread through the hole of the bead but I got it done.

A little later we then went on a guided tour of the grounds. Now, what you need to know about Korea and this post are two things. First, Korea has lots of mountains. Second, Temples are built on the sides of mountains to be closer to a natural surrounding. So, when I say ‘tour’, I meant to say ‘Lets climb a bunch of steps after you just killed your legs doing 108 bows.’. Sigh. Still, I did that too. 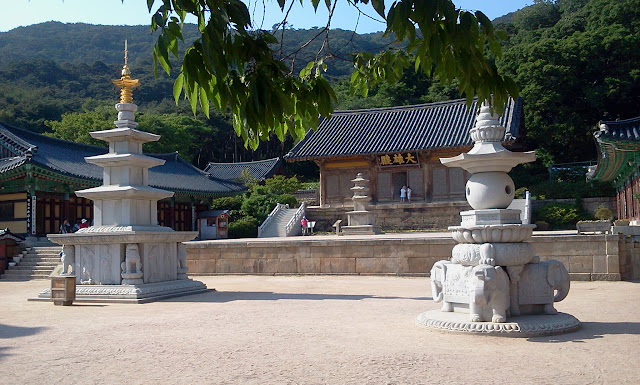 What you see here is the main temple (middle) and three stupas.

From that grand repository of knowledge that is Wikipedia:

A stupa (from Sanskrit: m., स्तूप, stūpa, Pāli: थुप “thūpa”, literally meaning “heap”) is a mound-like structure containing Buddhist relics, typically the remains of Buddha, used by Buddhists as a place of worship.

The Stupa in the background (closest to the Temple) is pretty old (hundreds of years, don’t recall exact time) and the one to the left is fairly new. The new one purportedly contains some of the ashes of the Buddha. The Elephant one we weren’t told anything about.

There was a monk ringing a bell. Don’t know which ceremony this part was for but it was interesting.

Seeing as I am a meatarian, I did not participate in any of the meals. Yes, that meant I missed out on part of the experience but such is life and donuts. I am what I am :) After dinner we had a talk with some Buddhist monks. 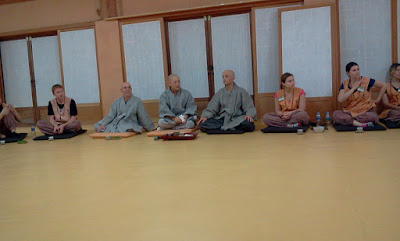 Then it was lights out at 9pm because we were getting up at 3! For me, this was the most difficult part. Not the getting up but the going to sleep! I had the hardest time and slept only in pieces. At one point I was awake and thought, ‘geeze, gotta be after 1am by now’, I looked and it was only 11:14. Dammit. Well, eventually slept enough sporadically and got up at 3am with no issues. We put on our temple clothes, having taken a shower the night before, and all filed over to the morning drum ceremony. I took a short video of this but seeing as it was 3:30am, there was no light int he sky so all you will see is black and maybe the odd flash of someone taking a picture.

So after breakfast we went hiking. It’s not like my legs were near mush from the 108 bows already, this put me almost over the edge! 500 stairs up the side of a mountain. Sure, it was beautiful but man was it killer. 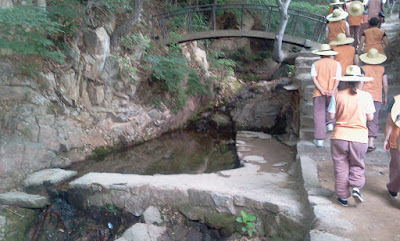 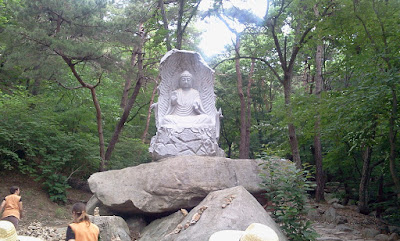 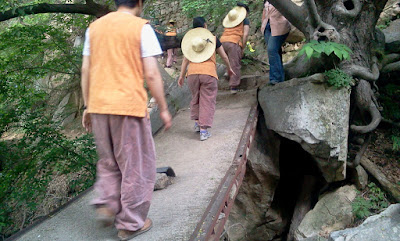 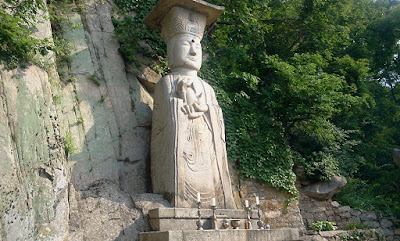 I thought going up was hard! Going down proved to be the worst for me. We didn’t go down the steps, instead we went down a paved road (dammit, why didn’t we take THAT up!). What was hurting me the most was my thighs, nothing else. So going down which muscles do you use to stop you from falling forward? That’s right, your thighs! The road is purely steeped at some ugly angle like 30degrees. That is when I discovered a way to get down the mountain without having to stop for 5 mins ever single step. I walked backwards. My things were only used minimally and my calves did the bulk of the work. So, I literally walked backwards down the mountain. Yeah, I was the last one down but I made it and didn’t collapse/roll all the way down at least.

After we got back we had a ‘lotus lantern’ making event. Essentially a paper cup with tissue paper glued to it. That didn’t go so well. I had more glue on my fingers than on the cup. The paper didn’t seem to want to stick to the cup so well so after 20 mins I gave up. Many others were making absolutely stunning looking ones but mine was looking rather sad. We also got a visit from KBS (A local TV station) who was filming for a TV show. We knew about this before hand so it was OK. When they came in, there was a famous Korean Actor that came with them. Never heard of him but I decided to get my picture taken with him any ways. 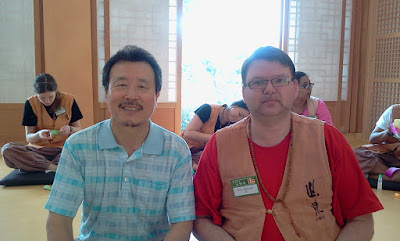 It’s a little amusing to hear that when he was walking up to the temple, all the Koreans were pointing and exclaiming who he was. He walked into our room and no one batted an eye. He was a nice enough guy and some people got interviewed for the TV show episode. Hopefully I’ll be able to see that episode. I didn’t get in on the filming but I would be in the background somewhere :) His name is Hwang Bum Sik.

After that we packed up and headed home. On the way back we stopped at a ‘hermitage’ place. I was told there wasn’t much walking. They lied. 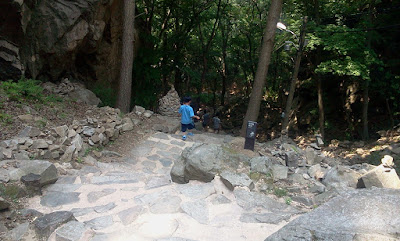 I only prayed that all the escalators were in service for the subways I had to take home. Home. 3 flights up steps up. I texted Bharati to meet me downstairs so she could grab my backpack off of me.

All-in-all, it was a good trip, met some very nice people and would recommend it for anyone.

You can see the whole album here.