It’s amazing how fast time can go by when you get busy. I have been working on a….let’s call it a project, so my free time has been cut in half. Out of that time I sleep and been pushing my self-directed education on ‘all things tech’. As such, my blog posts have been obviously more quiet. Now I am slowly settling into a rhythm and forcing some time for more update. I’ve got lots to show you at least as I have not been slack in taking pictures

Yes, it’s true. I am an alien. I even have an officially issued ID card to prove it!

So, for all those who suspected me of being one, now you have your proof. More shall be revealed in due course about our plans for your puny world….err, I mean this beautifully human-food-laden…..err…scenic place.

Let me start my catchup with everyone’s favourite subject…..food.

I will say this, the strawberries here are the largest and sweetest I have EVER tasted! Although I can’t really give proper description of the taste, suffice to say that the reason most people use whip cream to dip their strawberries in is to off set the tartness. Such a practice would totally kill the natural sweetness of these berries!

(Click here for a few more pics of these monstrosities)

Now, on the flip side of this trip we’ll be displaying a rather bizarre collection of pets. Spiders! (Yes….I said collection….)

And what collection of pet spiders is incomplete without a Tarantula! 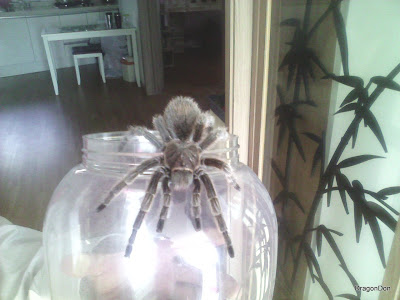 You can click here to see a few more pics of his collection.

Now that you are thoroughly freaked out (well, most of you, some are probably already clicking on the link for more), let’s go onto a few other mildly strange things here.

I’m going to teach you some Korean. You’ll be totally amazed at how well you will pick this up!

The interesting thing about older languages is that the rules for modern words vary wildly. Older languages have no rules for incorporating modern terms. So each culture will do what they feel is best. With Korean there is a term called Konglish (Korean/English). There are some words that just do not have any way of being created with the Hangul characters. This is because the Hangul language was originally based on Chinese characters. Chinese writing has dated back around the 14th century. So, using a language based on that kind of age you are bound to run into a problem with new words. For example, Computer or Network. Both very modern words and do not have any direct translation whatsoever. Although I never did quite understand why they didn’t form the same words the same way the word was formed for English.

Yes I know computer comes from the two latin words (with[cum] and think[putare]). Still, as a modern implementation of a device, such words do not always translate well. In Korean computer is ‘kom-pyew-tuh’. Just about every Korean also ends with a vowel. So Koreans will take English words and add a ‘uh’ on words that have a consonant at the end.

For example….end will become end-uh. “is” becomes is-uh. It’s very tough to get them out of that habit but the ones who pay attention will stand out in their English pronunciation.

Now, armed with that knowledge let me give you a few Hangul characters and see if you can figure out the following words.

This is an s. Sometimes a ‘sh’ sound.

This is ‘aw’ sound. It gets shortened typically after a consonant to ‘uh’.

So, test your new found knowledge and figure out this word.

First person to email me what this means will get a special Korean gift from here! (You Koreans on my list, and people I KNOW who are learning Korean are not eligible).

I can tell you that after learning the Hangul characters I get a huge laugh when I read Konglish words like ‘mechanic’ and even ‘chicken doctor'(a restaurant).