Nothing makes you take more notice than things that are strange. One of my favourite definitions of the word:

being definitely out of the ordinary and unexpected; slightly odd or even a bit weird

Many times I fell that even this definition can be a serious understatement when you are in Korea. The things that go on here, the sites are both downright wrong and ‘what the hell are they thinking’ kind of understatement. This is going to be an ongoing theme in some of my posts and one I’m sure everyone will enjoy.

Let’s start with an easy one. Fridge Magnets are pretty common. You have all kinds of these in various shapes to decorate your kitchen fridge door with. These are nothing new. I will seriously question someone who buys THIS one. 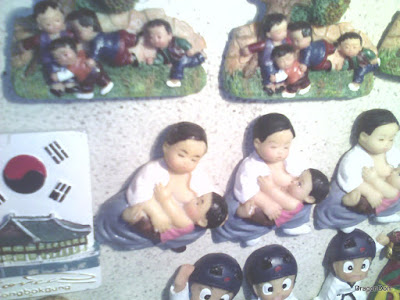 I mean, I have all kinds of respect for women and the process they go through when rearing a child but really….do you need a fridge magnet to remind you? Also, the magnet is lying as the average Korean Girl is NOT that busty either….

We all know that advertising is big business. The type that you see on store windows, billboard and sign posts is known as ‘interruption advertising’. Meaning your thoughts are interrupted by a visual object that was not asked for. Here is a typical sign on the side of a bus here. 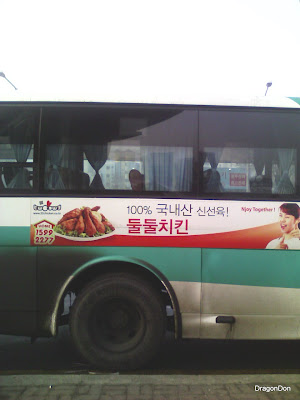 Now, at first glance, it looks like any other advert, except in Korean of course :) But wait, there is something wrong about how they try to mix English into it. Take a closer look. 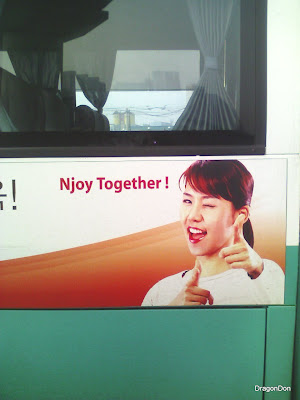 That’s right……they want you to ‘Njoy” the chicken ‘together’. Although I have no idea who else they want me to Njoy their chicken with as there is only one girl in the advert who seems to be spasming…..maybe it’s the spice?. I have seen ‘injoy’ as well used on the wall in a major fast food chain store of Lotteria.

I forgot to mention that I FOUND JESUS!!! Boy, these Jehovah’s witness are gonna be pissed when they find out I did. 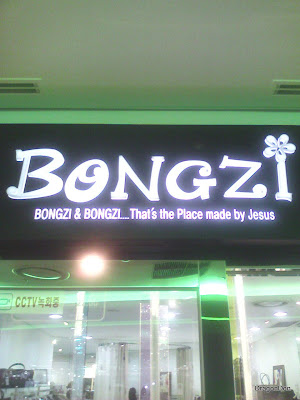 Ok, so I really only found the ‘place made by Jesus’ but I’m sure I’m close! Although I must say, finding a store in COEX Mall that sells handbags and such is a strange place indeed for the Son of God to be involved with……does anyone if Bongzi is Hebrew for anything?

Speaking of those who rise from the dead, where was the Lamb of God when I found these bodies by my building eh?! 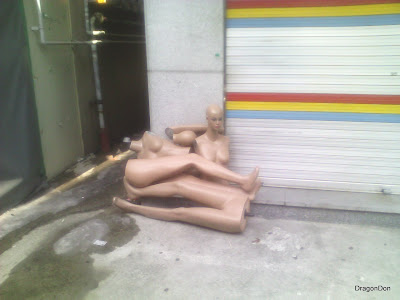 It sure likes the killer was pretty brutal with these girls…..even more weird that he took all their hair……unless Sinead O’Conner was recently reported missing in South East Asian recently.

The term ‘street meat’ takes on a whole new meaning over here and oddly might be connected with the previous picture. 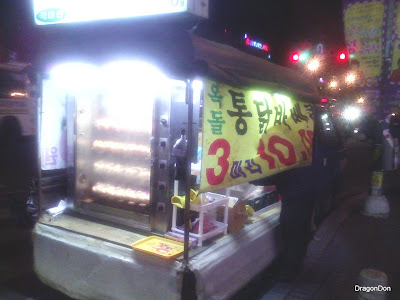 This guy cooks and sells ‘chicken’ off the back of his truck. 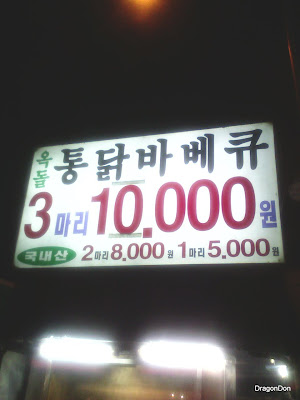 The prices are quite reasonable too. The chickens are rather small and we were worried that we couldn’t fit too many in our wee little freezer. We bought two for 8,000 won (about $7ish) and made everyone on the bus feel pretty hungry from the wafting fumes of the roasted chickens that pervaded the air. I was impressed as they taste pretty damn good, lightly spiced too.

I’ll end this post with a ‘covert video’ that I just _had_ to take. The audio kinda sucks but that doesn’t matter. What matters was the subject filmed and that he was completely unaware of it while I was doing so. Feigning the idea that I wanted to show my wife the back of my laptop, I captured this poor unfortunate guy obviously on his way to work. Although I swore if he got up and started signing and dancing I would have to just kill him.

Where the hell does this guy work? from Don Belmore on Vimeo.

We were on our way to check out the Seoul Aquarium at COEX Mall when this fellow go on the subway. I ….I was at a loss for words but I was determined that if he got up and broke into song and dance, I resolved to put him out of his misery.

One thought on “The Strangeness of it All”